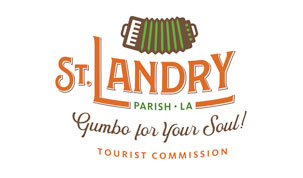 The selection of Herman Fuselier as St. Landry’s new tourism director brings to the post a man who has been recognized for his passion and love for south Louisiana.

Fuselier, 56, a native of St. Landry Parish, began work as director of tourism in St. Landry Parish on December 17, replacing Celeste Gomez, who retired after 21 years at that job. He is a widely recognized authority on the music and culture of south Louisiana.

"Herman is a natural fit as he possesses the love and appreciation of what St. Landry Parish is all about,” Gomez said of her successor. “He has been and will continue to be a huge asset as he leads the way in growing the tourism industry here.”

Fuselier is a 1980 graduate of Opelousas Catholic High School and received a degree in journalism in 1984 from LSU. He has been writing about south Louisiana for more than 20 years, most recently as music and entertainment editor of the Lafayette Advertiser. He began his journalism career as a sports writer for the Opelousas Daily World in 1986. In 1989 he took a job with the Tuscaloosa (Ala.) News but returned to the Daily World in 1993 as sports editor and moved to The Advertiser in 2000 as a feature writer. He also hosts the “Zydeco Stomp” show on KRVS radio that celebrates south Louisiana music.

He is a recipient of the Lieutenant Governor's Passion for Culture Award and sits on the Louisiana Folk Roots board of directors.

“To me, promoting St. Landry Parish is something I’ve done all my life,” he said after his appointment by the St. Landry Parish Tourism Commission. “We have music and culture and language unlike anywhere else in the world.”

He sees his new role as a natural evolution from his reporting, particularly on south Louisiana’s Cajun and Creole music industry.

“I’ve written about it for years and got to know the movers that are involved,” he said. “To me, it was a natural fit where I could continue to promote all of the things we have here in St. Landry Parish.

“I want to build on the great job Celeste has done,” he said.

St. Landry Parish tourism has seen steady growth during Gomez’s tenure. A University of New Orleans study found that visitors spent $54.5 million in St. Landry Parish in 2017, generating $1.95 million in local taxes. A significant part of that growth has come with the development and promotion of so-called “cultural tourism” which focuses on St. Landry’s unique history and the cultural mélange developed from it.

“We’ve worked really hard and become a major player in the tourism industry for the state,” Gomez said. “My time spent in the tourism industry has enabled me to cultivate an even greater appreciation for our parish and, more importantly, the people that make it what it is. It has been a privilege to tell the story of the place that I am proud to call home to folks from around the world,” she said.

Among other things, her efforts in telling that story helped bring the St. Landry tourist commission a Louey Award, given by the state for outstanding tourism promotion.

“Celeste has been a leader in showing that our area tourism and cultural economy are true economic assets,” said Bill Rodier, economic development director for the parish. “We will absolutely miss her passion and commitment towards helping our area move forward in so many ways.”