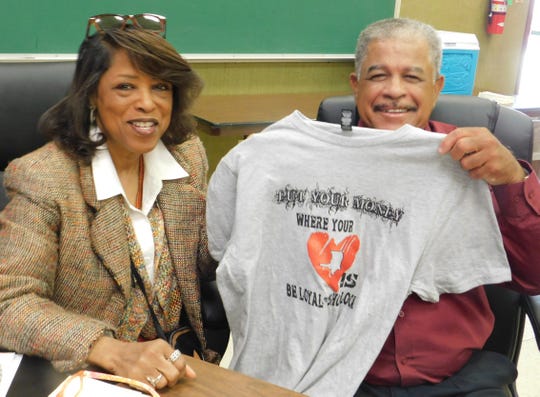 Advertised as the “Be Loyal, Shop Local” program, the goals are to help to create more local jobs and to educate the public in shopping with locally owned businesses that school officials said specialize in personal service.

Tricia Fontenot, the district’s instructional and technology facilitator is in charge of the effort.

Individuals can help the campaign by visiting the district’s website and purchasing items such as T-shirts, yard signs and vehicle window stickers, which will help to increase visibility for the campaign, Fontenot said.

The profits from the sale of the items, Fontenot said, will be invested in the district’s effort to promote the campaign.

School employees also will be affected, she said. The district’s main local revenue source is derived from sales tax. A special tax fund dedicated entirely for teachers’ salaries is also tied to a separate sales tax.

Employees’ organizations have appeared before the board recently asking to increase the amounts of the bonuses.

Some board members such as Denise Rose and Milton Ambres have told representatives of the organizations that shopping with local vendors will help to increase the sales taxes that are placed in the workers’ salary fund.

St. Landry Parish school board member Denise Rose listens to comments on her proposal to build a permanent classroom complex at Palmetto Elementary. (Photo: Bobby Ardoin/Special to the Daily World)

At the end of July, the fund balance remaining in the teachers’ salary account was $3.96 million, with $1.384 million available for the annual bonuses.

Bill Rodier, executive director of the St. Landry Parish Economic District, said the parish has experienced what he called “retail leakage,” as local shoppers are often enticed to travel to the Lafayette area.

Rodier estimated that about $106 million in potential sales tax revenue has left the parish over the past couple of years and ended up in businesses elsewhere or in internet sales.

Although he did not provide specifics, Rodier predicted that St. Landry shoppers will have what he described as “more retail options” by 2021.

“That’s something which has been long overdue in this parish,” Rodier said. “It’s not a secret that online shopping with vendors like Amazon has put a lot of pressure on the local economies. I think something like the local shopping campaign will help make the effort to shop local more visible.”

“When we ask for donations, our local businesses are the ones that have helped us the most,” she said.

Opelousas to Turn Traffic Boxes into Works of Art